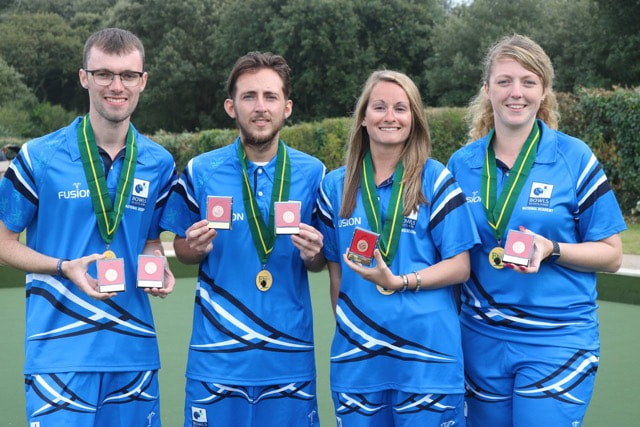 Jason Banks, Greg McLaughlin, Emma McIntrye and Natalie Docherty
Jason was selected to represent Scotland at The 11th European Bowls Championships which took place during the week commencing Sunday 24th September - Friday 29th September at Les Creux Bowls Club in Jersey. Matches were played on an outdoor artificial surface which was a new and testing challenge for Jason.
The format of the Championships was such that each of the 16 nations taking part had a team of two male and two female players. They played in Ladies and Gents Pairs and then altogether in Mixed Fours. There were two sections of 8 teams in each discipline, playing each other in a round robin. Points were awarded for each set won or drawn and the winners of each discipline were the highest up out of both sections merged together.
Jason skipped in the Gents Pairs alongside lead Greg McLaughlin (Blackwood Victoria BC). They faced opposition from Turkey, Jersey, Germany, Israel, Hungary, Cyprus and Ireland and remained undefeated. After all the round robin games were played, the three teams at the top of the Gents Pairs table all had the same points with only shot difference separating Scotland, Ireland and Guernsey. Scotland ended up taking the Bronze medal, Ireland the silver and Guernsey the gold. It was a bitter sweet moment for Jason and Greg as they had came so close to winning the gold!
The Scottish Ladies Pairs duo of Emma McIntyre (Dumbarton B.C) and Natalie Docherty (Kelvindale B.C) finished in 7th position overall so were unfortunately out of the medal positions.
Jason also skipped the Scotland rink in the Mixed Fours championship. Greg lead once again, with Emma as the second and Natalie as third. They faced opposition from Jersey, Isle of Man, Spain, Wales, Turkey, France, and Cyprus. The team lost one game against Turkey, managed to draw against Wales and won all their other matches. They finished in 3rd place once again due to shot difference, with Ireland taking the silver medal and Wales taking the gold.
There were also medals awarded for the Best Team overall taking the Gents Pairs, Ladies Pairs and Mixed Fours results into account and Scotland once again landed the bronze medal, Guernsey got the silver and Ireland won the gold. Team Manager and National Academy coach Frazer Muirhead headed home with the young team to Glasgow airport proud of their medal haul.