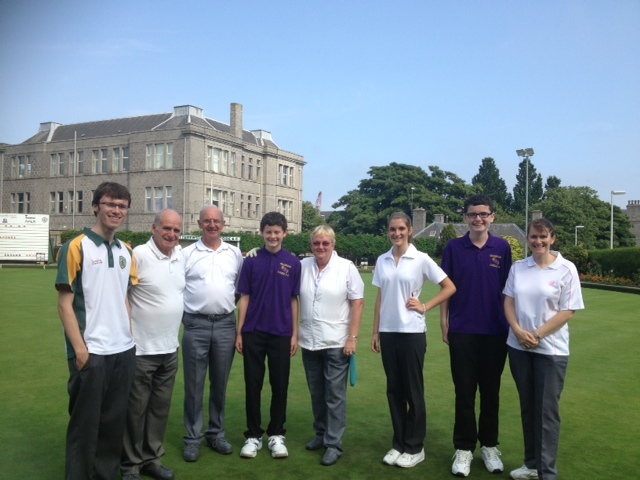 Jason Banks, Andy Wood, Bill Dalgarno, Andrew Thomson, Wendy Dalgarno, Carla Banks, David Thomson and Angela Banks - Inverurie's Semi Finalists
Inverurie Bowling Club were represented by 3 teams at this season's Generation Game which was held at Kittybrewster and Woodend Bowling Club, Aberdeen.  Two of the teams qualified for the semi final stage, where they met each other for a place in the final.  Carla Banks' team of Angela Banks, David Thomson and Wendy Dalgarno got the better of older brother Jason's four, made up of Andy Wood, Bill Dalgarno and Andrew Thomson.  Carla's rink went on to win the competition with Jason's team winning the 3rd/4th place play off. 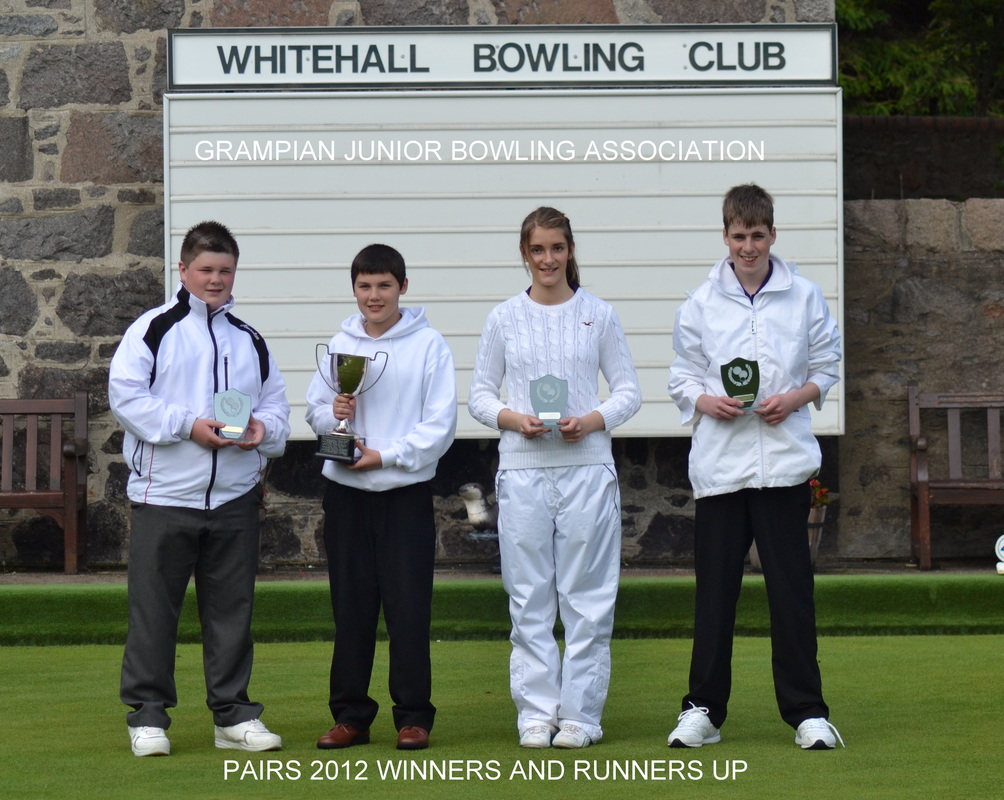 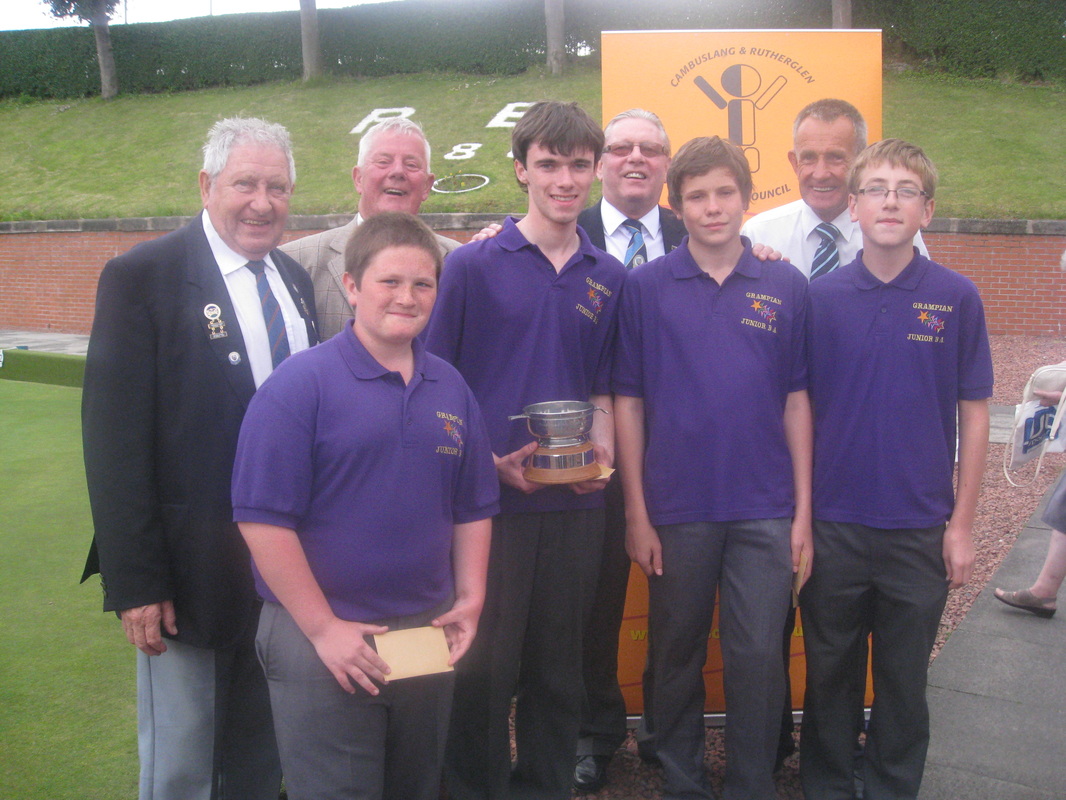 The  Scottish Association of Local Sports Councils held their annual National Inter Sports Council Junior Bowls Tournament on Sunday 12th August at Rutherglen Bowling Club in Glasgow.  There were 12 teams of 4 players in attendance from around Scotland and they were split into 2 sections. Each team competed in 5 matches in a round robin format with the winners and runners up of each section going on to play in the semi-finals, with the winners playing in the final.

From this area there were 2 teams (each with 1 reserve) entered from the Grampian Junior Bowling Association.  Included in the teams were local juniors Jason and Carla Banks from Inverurie BC,  Jamie Hoper from Insch BC and Kevin Murray from Westhill BC.  The ten junior players travelled down to Glasgow on Saturday 11th August in the Grampian Junior mini bus and there were also 2 cars of traveling supporters.  After unpacking at the hotel the players were treated to a surprise trip to the Hampden Park Museum.  Everyone the travelled to Rutherglen Bowling Club for a practice before the evening meal.

The competition started at 12pm the following day and the players were raring to go after a hearty breakfast ! Jason skipped a rink with Jamie Hoper 3rd, James McDougall (Bonnymuir BC) at 2nd and the lead was Kevin Murray. Ronald McDougall (James' twin brother) skipped the other team with Andrew Gregor (Woodend BC) at 3rd, Carla Banks 2nd and Kieran Craigens was leading.  The two traveling reserves, Emma Reid & Michael Buchan, actually got to play in the tournament with two other players from Hamilton since their other two team mates from Hamilton didn't turn up.  The new team was called the Grampian / Hamilton Select and were in the same section as Ronald's team.  They tried their best together but didn't qualify on the day.

Ronald's team won their first 2 games but unfortunately went on to lose the next 2. Although they managed to win their last match they didn't qualify for the Semi Final on shot
difference.

Jason's team lost their first match by 1 shot, but went on to win 2 games (one against the holders West Lothian) and draw 2 games. They qualified for the Semi Final as runners up of
their section and would play against the Clydesdale team from Lanarkshire who were the winners of the other section. The Grampian team played well in the Semi and won that match 10 - 1 and so were through to the Final. This is only the second time since entering the competition some years ago that a Grampian Junior team has qualified for the final. The other Semi Final winners were East Kilbride Strathaven who also played well in their match against Wigtownshire.  The Grampian Juniors knew that the Final was going to be a tough match against strong opposition. They lost a 2 in the first end but then went on to win all the other ends and the tournament 7 - 2.

This is a great achievement for the Grampian Junior Bowling Association and President Frank Philip was proud of the 4 players who won it for the first time on behalf of the junior association.  The team were presented with JJB gift cards and the rosebowl trophy by David Laing the Chairman of the SALSC and Councillor Russell Clearie MBE of Cambuslang & Rutherglen Sports Council.   It was Kevin Murray's 13th Birthday on the day and the officials got all the players and supporters to sing Happy Birthday to him.  Kevin will surely remember what he achieved on his 13th birthday forever. This rounded off a good weekend for the Grampian Junior bowlers who headed home in the mini bus tired but happy ! 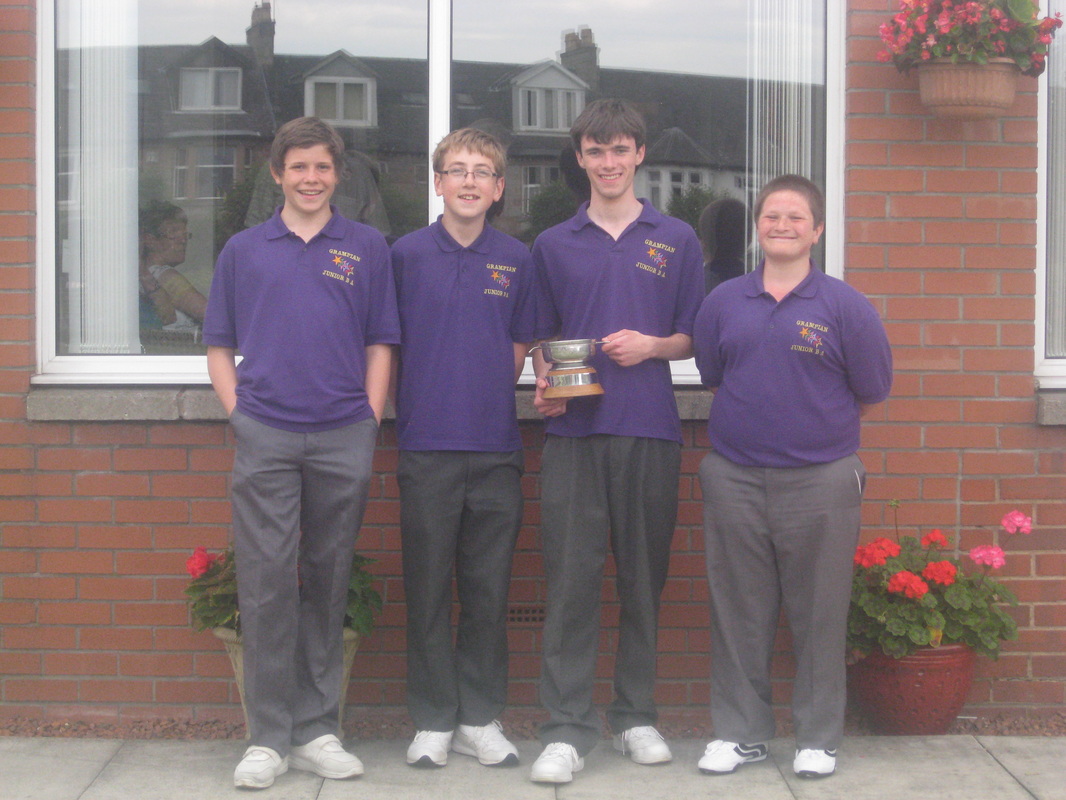