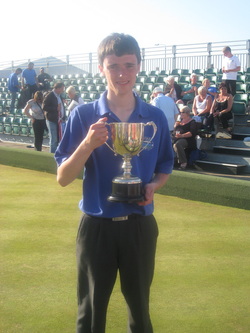 Congratulations to 15 year old Jason Banks of Inverurie Bowling Club who won the Scottish Young Bowlers Association National Under 17 Singles Championship.  The SYBA National Finals were held at Northfield Bowling Centre in Ayr on Tuesday 26th July 2011, a day prior to the Bowls Scotland National Championships.

There were 24 competitors from all over Scotland in
each of the Singles, Pairs and Triples disciplines, each having won their district qualifiers in order to compete at the Finals. The Singles, Pairs & Triples were split into groups of 4 sections of 6 competitors and they played 5 games in a round-robin format. The winner of each section went through to the semi- final stage.

Also down to Ayr to play in the SYBA National Triples competition were Martyn Thomson (Inverurie), Cameron Taylor (Insch) and Carla Banks (Inverurie). They won 3 games and lost 2 (one game only by 1 shot) and came runners up in their section, so just missed out on reaching the Triples Semi-Final - which is a great achievement against some of the best young players in Scotland.

Congratulations and well done to all six players. It was a great experience for all the young bowlers and one which their families and supporters also enjoyed - the glorious weather also helped to make the occasion a memorable one.  A big thanks must go to everyone who travelled to support them - especially Jim Whyte, a Past President of Inverurie BC, who helped to mark games for most of the day.

The icing on the cake for Jason and Andrew is that they have now been selected to play for the SYBA National under 17 Scotland Team. They will play against England (Northern Counties) on Sunday 18th September 2011 at Gosforth, Northumberland. The boys are already looking forward to the team get-together and to the match against the “auld enemy” ! 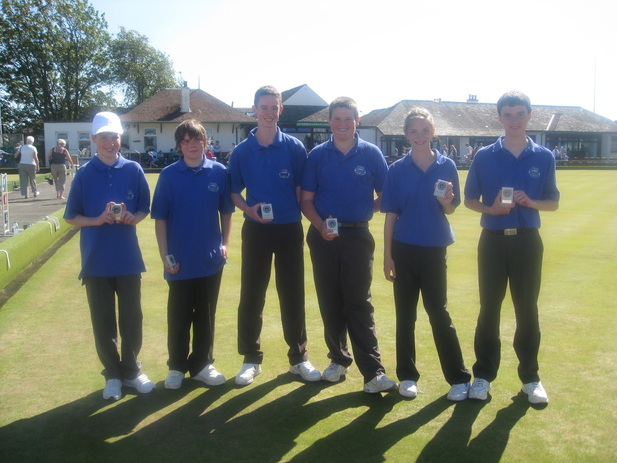